Home » Uncategorized » Learning how to talk about difficult topics

Too often, the things we need most to talk about go unsaid, like the way we look and differences in our cultures. Usually, we settle into our customs and prejudices and leave it to someone else to question orthodoxy.

The good thing about working at a university is that the questioning happens every once in awhile, and some of us listen. I had to opportunity to partake of such a situation last month when a group of young artists visited Western Connecticut State University. Mostly just graduated themselves, they tackled the subject of race as interpreted by the leader of the group, Andrew “Fig” Figueroa. Fig is mixed race or, as he refers to himself, “ambiguously brown.” His mother is white, born in England, and his father was born in Mexico. Fig is a U.S. citizen and grew up near Los Angeles.

He created a Hip Hop theater performance that demonstrated how, as the product of two races and two cultures, he doesn’t fully fit into either. Through dialogue and singing Fig and the other musicians created scenes that were awkward or humiliating – a police officer accusing him of wrongdoing as he walked home, the first meeting with the mother of his white girlfriend, the assumptions of a guidance counselor on the first day of college orientation, his inability to be fully understood among his Mexican aunts, uncles and cousins.

“Growing up as a mixed-Latino, I have struggled through many confusing, uncomfortable and alienating experiences — never sure where I fit, even when I knew where I wanted to fit,” Fig explains. “Media have a big influence on how we shape our identities and how we think we should identify others.”

The goal, he says, is to show how we all can “feel proud, authentic and safe.”

As you might have noticed, I am a white male firmly ensconced as part of the power structure. I try my best to focus on my own place in the world, but I was jolted out of that comfortable position one evening. I sometimes teach a writing class to mostly freshmen and sophomores and I was lecturing them on staying out of trouble. I asked how many had been stopped by police recently. To my surprise, four young men raised their hands. They all said they are stopped every two to four weeks while driving, after which they are questioned and then told to move on. The one white kid had been put in handcuffs, he said, before he was released. He said he was traveling with some Latino kids and had his ball cap on backwards. They all took it for granted that they would be stopped again soon.

So here is an obvious example of how the color or our skin affects our interactions with the world. The question remains: How often do we talk about it, and listen to each other?

These issues make us feel uncomfortable, and it is difficult to find the right language to discuss them. Fig found one way to illuminate the topic. He and his group will be forming Mixed-Race MixTape again in February at WCSU. Watch here for a notice of the exact date and time if you are interested in learning more. 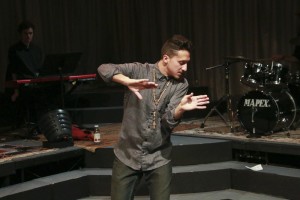